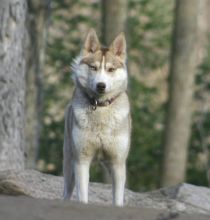 A fiesty yearling teammate in 2007 Ariel is now 4 years old. Her siblings are Belle, Beauty & Jasmine, the “Disney Princess” litter out of Jewel & Bear. Ariel living up to her namesake has red hair and blue eyes!! She totally loves running and it will be interesting to see if she becomes a […] 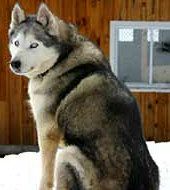 Cherokee has been with us for quite a few years now and is approximately 12 years old. The kennel she came from had rescued her a few years earlier. Her family had moved away and left her tied to the house by herself. Considering how she was treated she has a great personality, very loving […]

A 5 year old Rip & Gerdie boy, and brother to Joker (his mortal love/hate enemy), Duke, Harley, Ninja, Suzy and Rebel he bears a striking resemblence to his father. Ace loves to run and is a powerhouse of a wheel dog but is also now becoming a great leader. He also enjoys stirring the […]

A full brother and identical twin to Cosmo, Rusty is also his brother. While Comet (12 years old) and Cosmo look absolutely identical their personalities are very different. Comet, while loving to have fun is more serious than his twin. Comet runs everywhere, lead, wheel & point and loves every second of it! When out […] 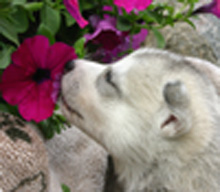 A new young member to the race team this year, Andy & his sister Snowball were born in January 2007. Their parents are Foxy and Ninja. Not exactly a planned litter, more a fall training run romance….. However with both of their parents on the race team they have great potential!!! Hank named Andy after […]

Signup for our Newsletter

Get notified about whats going on at Winterdance and receive a free gift!